This marked my first visit to the Maryland Renaissance Faire.
I met many wonderful people here and saw many wonderful sights.
Some of these are pictured below. 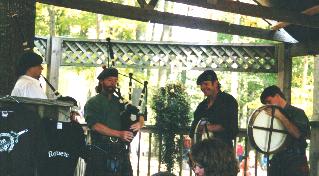 And we cannot forget the incomparable: 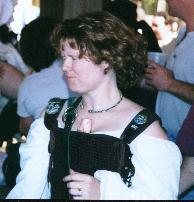 She looks like she just swallowed a gallon of lemon juice, doesn't she?
But you see, it's actually that she doesn't like having her picture taken.
I got lucky with that shot.
Most people who aim, say "Sunni", and get her to look discover that
she turns away very quickly and they end up with a picture of the back of her head.
Well.  This just will not do.  The following picture earned me the title of:
"The SneakyEvil Wench".

Now isn't that a nice picture of Sunni?
She had no idea I took it or was going to take it until I did.
She called me "Evil" and "Sneaky".
Thus was The SneakyEvil Wench title born.

Here's a link to see some of the Day of Wrong.
There was a combined Wenching and Rogueing that took place, too.
Or return to the Photo Index.
All photos ©2001 by Josephine Marie Thane.