Religion can be a very touchy subject.  So let me tell you what I am, what it means, and most importantly, what it does not mean.

I am a Pagan.
I am a priestess of Artemis.
My craft name is Panartemis, meaning "All Artemis".
I am also an ordained Reverend, through the Universal Life Church.
I hold an honorary Doctor of Divinity.
I am affiliated with Kindred Spirits.

What this means is that I am not a Christian.  I worship a Goddess that was worshipped before the Christian god was known in the Western world.  I am a follower of the ancient Greek pantheon of gods and goddesses.  Artemis called me to serve her in the same way that the Christian god calls those who serve him.  My faith in my Goddess is sure.

What this does not mean is that I practice devil worship.  The devil, or Satan, is the creation of Christianity.  This also does not mean that I sacrifice living beings.  For one thing, such an action is usually illegal.  For another, it's immoral.

I am not going to insist that this is "the one, only true way to salvation".  It is not my desire to convert you.  It is also not my desire to be "saved" by any other god.  If you wish to learn more about Artemis, keep reading.  Otherwise, please click one of the buttons to go to a different page. 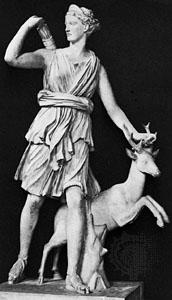 This marble statue of Artemis
is on display at the Louvre.

In Greek religion, Artemis is the goddess of wild animals, the hunt, and vegetation, and of chastity and childbirth; she was identified by the Romans with Diana. Artemis was the daughter of Zeus and Leto and the twin sister of Apollo. Among the rural populace, Artemis was the favourite goddess. Her character and function varied greatly from place to place, but, apparently, behind all forms lay the goddess of wild nature, who danced, usually accompanied by nymphs, in mountains, forests, and marshes. Artemis embodied the sportsman's ideal, so besides killing game she also protected it, especially the young; this was the Homeric significance of the title Mistress of Animals.

The worship of Artemis probably flourished in Crete or on the Greek mainland in pre-Hellenic times. Many of Artemis' local cults, however, preserved traces of other deities, often with Greek names, suggesting that, upon adopting her, the Greeks identified Artemis with nature divinities of their own.

While the mythological roles of other prominent Olympians evolved in the works of the poets, the lore of Artemis developed primarily from cult. Dances of maidens representing tree nymphs (dryads) were especially common in Artemis' worship as goddess of the tree cult, a role especially popular in the Peloponnese. Throughout the Peloponnese, bearing such epithets as Limnaea and Limnatis (Lady of the Lake), Artemis supervised waters and lush wild growth, attended by nymphs of wells and springs (naiads). In parts of the peninsula her dances were wild and lascivious.

Outside the Peloponnese, Artemis' most familiar form was as Mistress of Animals.  Poets and artists usually pictured her with the stag or hunting dog, but the cults showed considerable variety. For instance, the Tauropolia festival at Halae Araphenides in Attica honoured Artemis Tauropolos (Bull Goddess), who received a few drops of blood drawn by sword from a man's neck.

The frequent stories of the love affairs of Artemis' nymphs are supposed by some to have originally been told of the goddess herself. The poets after Homer, however, stressed Artemis' chastity and her delight in the hunt, dancing and music, shadowy groves, and the cities of just men. The wrath of Artemis was proverbial, for to it myth attributed wild nature's hostility to humans. Yet Greek sculpture avoided Artemis' unpitying anger as a motif; in fact, the goddess herself did not become popular as a subject in the great sculptural schools until the relatively gentle 4th-century-bc spirit prevailed.

Artemis, the Maiden of the Silver Bow, has the power to send sudden death to mortals, as well as the power to heal. She was accompanied on her hunts by lop-eared hounds, had sixty ocean nymphs as maids of honor, and twenty Cretean nymphs to tend her hounds. She wore a saffron colored hunting tunic and her principal emblems are the date-palm, the stag and the bee.

On one occasion, Actaeon, a mortal, stood leaning against a large rock when he happened to see Artemis bathing in a stream. He stayed to watch. Artemis discovered him and changed him into a stag. Actaeon's own pack of hounds hunted him down and tore him to pieces.  The moon nymph (Artemis) properly bathed after the murder, not before. The scene has been rendered immemorial by several painters.